After leaving the mountain, things began to improve. The cloud we occupied did not follow us down the mountain. We were able to pull over for some the best views I have seen since arriving to Costa Rica. It was also significantly warmer as we made our way down.

Then, my boss and driver had a brilliant idea. He knew of another national park with a large lake that was formed after they installed a hydro-electric power plant. Also, his kids wanted badly to go to said park for a “really awesome” swing that they have there. (It was really awesome). This heavenly place is known as Charrarra.

This park was incredible. The greens were so vibrant and the place swarmed with life. Immediately after arriving we saw a duck with her ducklings, a snake (not dangerous), herons, and other waterfowl. There were amazingly colorful and large eucalyptus trees throughout. The lake was covered in a thick-batch layer of lilies. Some of the ones close to the shore were in full bloom. They had such a majesty.

The group all enjoyed some cold beers together and then we made our way around exploring the park. We wandered down some horse paths and decided it was too risky to dodge the apple grenades. After we had climbed into a model airplane designed for 4 to 6 year-olds, used a 4 person gravity spinning swing, and played some quick toss frisbee, we made our way to a low point lookout that was stunning.  Unlike the peak of the volcano, were able to see straight across all of the lake.

After a few gallivanting hours, we were all feeling hungry. We went to a local hotspot for chicharrones and enjoyed a lovely and reasonably priced meal before we made our way back to the city. The moral of the story: even a “bad” start to the day here, can end in wonder and amazement.

Bundle up? Cold? Okay, snacks. That makes sense. We are talking about Costa Rica, right? Home of the most beautiful beaches, rainforests, and mountains in the world? Same Costa Rica? Yes. THE Costa Rica. We were heading to one of the iconic volcanoes that give the breath-taking views that Costa Rica is known for: Irazú Volcano. I couldn’t imagine anything cold. I don’t think most people would.

We awoke to a partly cloudy sky in the central valley. Birds were singing to celebrate the morning as they always do.  Early mornings on the only collective day off for the staff is always a little sketchy. Not that everyone is opposed to getting up early, just apprehensive. However, all members of the party showed up on time. We were excited to see the dormant volcano.

The drive up was no peach. It rained, the fog was terrible, and there were no signs of it improving. Well, there was one time where we saw a slight opening to the cloud cover. It was a tease. We got to the peak, where the gift shop and parking lot are located, and stepped into a cloud. Literally. You could barely see 10 meters in front of you. It was windy. It was cold. It was atypical to the image of Costa Rica.

We huddled into the gift shop to escape the rain. They offered hot coffee or cocoa at tourism prices. Some of us paid. My fingers were very much going numb standing in the wet, windy cloud. We resisted the walk to the crater observation, hoping the conditions would improve. They didn’t. Eventually, we made the short walk anyway. The landscape screamed of a horror movie. Bleak, desolate, low-visibility. Perfect for mischief. (None occurred.) We peered over the edge, where one would normally find the crater, and saw more of the same mass of cloud we were standing in. Disappointment abounded.

After snapping a few pictures of our other-worldly landscape, we headed back to the warmth and safety of the cars. The volcano will have to be visited another time. Stay tuned. 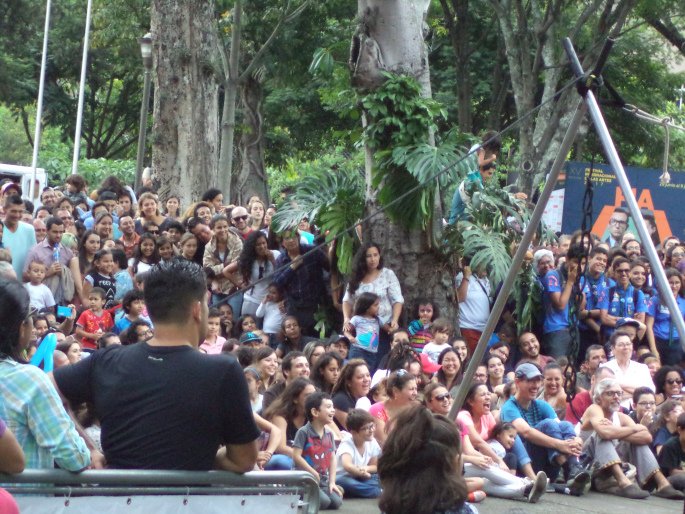 As buses careened through the streets, much of the city went about its Saturday as though there was nothing special. Perhaps there wasn’t. However, for the droves of people that made their way into central San Jose, the day was the height of excitement. The Festival Internacional de Las Artes was in its final stages. For 2 weeks (June 19 – July 9) FIA had captivated audiences with live music, stunning acrobatics, theatrical shorts, and so much more.

Crews of bulking men and machines were placed about the city in modes of work. The grounds were tended appropriately for the day to steal the imagination, sway the open-hearted, and dissolve the insistence upon reality. The cornucopia of culture quickly sated the hunger for collective belonging.

The walking avenues were packed. Street vendors plied their wares. You could find anything from socks, groceries, and fidget spinners to jewelry, DVDs, and pocket knives. The list is always endless. Whether looking for a quick bite or some live local accompaniment to your walk, the avenues are perfect for exploring the city life of San Jose.

Approaching the main festival staging areas, you could hear the music beating through the buildings, calling to the soul. The local pubs were filtering the thirsty in and out of the doors as breaks in the stage activity allowed time for refreshment. The courtesy offered to the traveler was incredible. Laughs were had over a few shots of chiliguaro and names exchanged. Offers were made to come sit with the perfect strangers. The demeanor here is truly “Pura Vida.”

The park and main stage at plaza de democracia were crowed with excited onlookers and music aficionados of all ages. Feet tapped, hips shook, heads bobbed. One man danced enthusiastically as the flute player on the stage hit the crescendo and the band followed suit with an invigorating folk masterpiece.

Leaving the stage area it was a short walk, about 3 minutes, to parque nacional. Here, for those not as thrilled by music, there was a pop-up mall of international and local vendors selling every type of art you could imagine. 2 more stages were also in place with live theatrical performances and physical comedy. The crowd mingled tirelessly, but as casual as though this sort of event happened every week. Lovers caressed, teenagers assembled, families played. The feeling was serene.

The FIA was and will continue to be one of the staples of the Costa Rican “summer.” There were too many activities to attend all or even most, but there is certainly something for everyone going on the entire time. To miss it, you would have had to avoid the area completely with your eyes closed, ears shut, and cynicism in full swing.